Did you Know… the First TV Star Nearly Burned to a Crisp?

Home>Did You Know>Did you Know… the First TV Star Nearly Burned to a Crisp?

Did you Know… the First TV Star Nearly Burned to a Crisp?

Video production and presentation are a huge part of what we do at Fisher Audio Visual, providing a wide range of state of the art video, visual and production solutions, all of which can be traced back to the pioneering innovations in television in the early part of the 20th Century, most notably by engineer John Logie Baird. However, the fate of the first face of Baird’s television experiments would be a shocking revelation of how difficult and dangerous early television technology was, and the risks these early pioneers would take to show their face around the world.

Television would be theorised and developed as early as the late 19th century as a logical extension of several major technological advances that came about at roughly the same time. Telephones proved that sound could be sent across a wire and later without a need for wires at all. On the visual front, the development of projectors had advanced to the point that an entire industry was beginning to form around showing films to the public. As well as this, the first step to combine visuals and sound and telecommunications would appear with the invention of the Nipkow Disk in 1884, named for its inventor Paul Nipkow which would be used as part of early television tests, including the first major demonstration by John Logie Baird in 1926.

To quickly explain, the Nipkow disk basically works by being a circular disk with a set of holes cut into it, which when it spins captures one line per hole and can send each segment across a line and transmit it to a screen that used similar technology to receive the image. John Logie Baird was one of a handful of inventors across the world who attempted to be first to take Nipkow’s theory and turn it into actual broadcasts.

It was far from the easiest job, and Baird didn’t exactly get out of his experiments unscathed, which is less surprising perhaps given that the first television set was made using a hatbox, a pair of scissors, some darning needles, bicycle light lenses and an old tea chest. He rented a workshop and got to work enhancing his prototype, an arrangement that ended after his landlord kicked him out for getting a 1000V electric shock. Somehow he got away with just a burned hand and an eviction notice. That was bad, but a much worse fate befell the first actor who appeared on television, Stooky Bill.

By 1925, Baird’s invention had developed to the point that he could actually send a moving image over radio waves, with a few caveats. The first was that the broadcast image would be the size of a postage stamp despite being recorded on spinning discs the size of dinner plates. The other is that the contrast was so low that incredibly hot incandescent lights had to shine very close to the subject, to the point that it would actually cook any poor person who tried to watch, not even taking into account the sheer amount of light boring straight into their eyes. None of that mattered to Stooky Bill of course, because he was made of sterner stuff than that. Plaster of Paris to be exact. Yes, Stooky Bill wasn’t a real person, but in fact a puppet created by Baird to actually do the first tests. Now he didn’t end up on screen entirely for safety; early video recording systems needed so much contrast that a human face barely registered, so good old Stooky Bill was painted bright white with prominent features and eyes in order to register on the camera. That being said, it was also for safety reasons, as Stooky Bill did not come out of his first starring role unscathed. His poor hair caught fire and his immaculate painted face cracked in the heat.

Stooky Bill’s sacrifice was not in vain however, as Baird did transmit 30 line moving images at five frames per second (about a fifth of the speed of most film cameras and a twelfth of the frame rate of most cameras today), which is just enough to show a human face just about moving. After that worked, Baird did manage to put 20 year old office worker William Edward Taynton under the lights to see what a human face would look like.

That would only be the start, as Baird would work with the British Broadcasting Corporation on experimental television productions, including the first ever television production ever, The Man With the Flower in His Mouth in 1930. Baird would eventually manage to get 240 lines out of his mechanical television broadcasts, which began infrequent test broadcasts in 1934 and regular broadcasts in 1936. The problem was by then EMI, after merging with Marconi (the company founded by the man who successfully realised long range wireless transmission), had figured out electronic television, with a 405-line electronic signal that crushed Baird’s aging and cumbersome technology in nearly every regard. The initial rollout was meant to last six months but barely lasted three before EMI-Marconi won out. 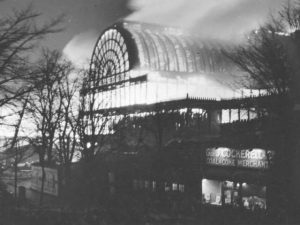 Much worse than this, Baird’s laboratories and experiments were taking place at the legendary Crystal Palace (which the football team is named after) but after a suspicious fire burned the entire building to the ground, his entire work was ruined and it would take years for him to get back to where he was, which by that point came to nothing as the Second World War raged across Europe. He would innovate with features such as high fidelity colour television, 3D stereoscopic television and even high definition (equivalent to 1080p, at a time when 405-line was considered “high definition). None of these innovations would take off in a post-war Britain still reeling from the devastation of the Blitz. Baird unfortunately would not survive to see any of these innovations come to life, as on 14th June, 1946, John Logie Baird would suffer a stroke and die, at the age of 57.

Baird and Stooky Bill’s efforts would lead them to the first step for television, an invention that would see constant use in all of its permutations and evolutions to this very day at Fisher Audio Visual. For more information on our range of televisions and camera equipment available for hire rental, please contact us today.

About the Author: admin